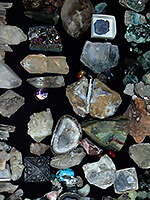 In 2003, I attended Edna’s Diva Lights crystal workshop. I’ve put this up online in memory of her, and all she did to help people. She was always known online as either Witchazele and later also as Diva Lights. I’m saddened to see so little of her left online other than one or two old social media accounts. Before you continue, please read my first part about Edna/Adina Czeriek here.

13 September was the date (according to my photographs and I am a stickler for filing), and the venue for the crystal workshop was her flat in Pierneef Park. As you will see from the few photographs I have, she really went all out. The presentation of crystals and stones was beautiful. I don’t recall much of the specifics of the day, and I think it’s because I was so engrossed in her knowledge. If I remember correctly, there were very few people in attendance at that first workshop.

I think Edna asked me to be there for several reasons. One, it was a good way for me to learn, and two, it reassured her to have someone she trusted there with her. I don’t know if she ever did many of these workshops, but if you did go to one, please let me know! With her passing, so much has been lost. 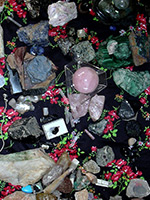 With this in mind, I have spent a lot of time on bringing it to you. I was always doing something computer-related for her, so this is my last task for Edna, in her memory. I also recall, and you will see it in my own notes, that she had lost the original document for what I have here for you. In true Edna fashion, it was most certainly lost in the sheer volume of information she accumulated. At some point, it was either misfiled, or accidentally lost from her old computer — probably due to reinstalling!

Either she had asked me about software that could optically recognise the printed documents, or I had suggested it to her, hence the notes on the last page reminding myself to go do some research on what would be best to recover this document. I’m somewhat saddened that I don’t know if she ever did this or not.

Anyway, I have done it now. I’ve recreated a document based on her printout on that day. It’s not optically recognised per se, as I do not have access to my high-end scanner (also still in storage.) What I did was photograph each page, and then painstakingly edit each image as best as possible. You can copy some of the text, but the rest becomes garbled, as some of the pages were copies of copies by that stage. 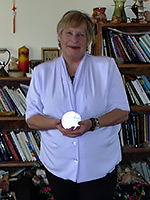 Yes, I brought the little binder with me when I immigrated to Ireland. Here is a little story of why I still have them. When I packed up at the end of 2018, I left with nothing but a suitcase to my name. In the last days of sorting out my life, either I found this document, or I had already set it aside to take with. It was in my suitcase when I left my old life behind, together with a crystal around my neck she had programmed and given to me. I had intended to read it once more, and then dispose of it, as I already know a lot of the information … just by having known her for those years.

Back then, I had not been in contact with Edna much, and I didn’t know she had passed on. My life has been in turmoil for many years now. This makes my Diva Lights printout all the more special to me. I’d like to share it with you. Unfortunately, it’s a brief document, and she was a great source in real life. I’ve also created a PDF of my own notes, and good luck with deciphering them! I only ever intended them for my own eyes.

This won’t bring her back, but it makes me happy to have a little bit of her live on, even if it is just online. You are welcome to contact me if you knew Adina Czeriek, or if you read her little crystal workshop manual and get some value from it.

Edna Czeriek was a great crystal healer and clairvoyant, and she made a difference in many lives. She will be missed, and I hope remembered by the people she met.