Ready for a World Currency: here Is the Truth

Ready for a World Currency?:

Here Is the Truth 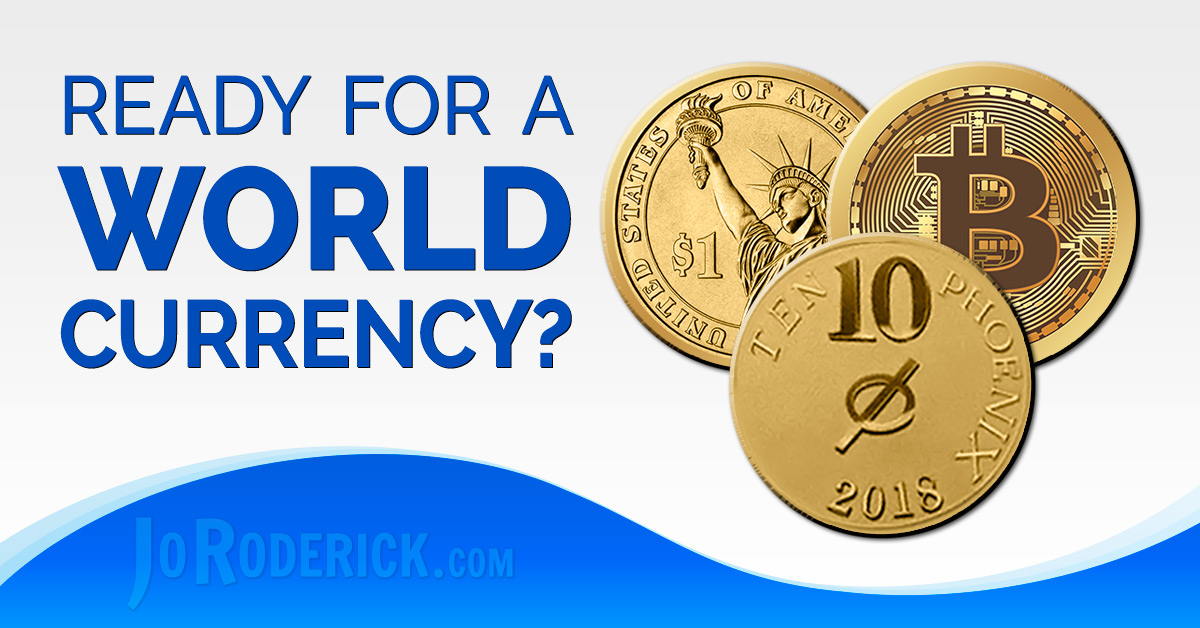 Get Ready for a World Currency by 2018 is what the Economist magazine told us in 1988. With the thirty-year date upon us, the article is back in the spotlight. Everyone knows I am not an economist, so why am I writing about this? Well, I am seeing people making a grave error.

When we speak of a new world currency, we think of world domination, subordination, and becoming enslaved to one single system: an unhealthy matrix, so to speak. In order for my article to make any sense, I need to give you a little background, and there is no better place to start than a decade ago. Right, Bitcoin and all things crypto it is then.

When I first heard about the crypto movement years ago, I rejoiced. I saw the way forward out from beneath the tyranny of those who are always in control. Slavery never dies: it merely sheds its skin and assumes another more palatable form. By now, some readers will be calling me a nutter, but bear with me.

The cryptography movement seeks to remove the seat of power from the few, and hand it back to the masses. I’ve been fervently hoping and wishing that the masses grab this opportunity, and make the change that is needed. It’s mankind’s first real chance at liberation. So why aren’t more people snatching it up? I keep asking the same question, but now we are faced with a new challenge.

When the people in power penned that original article, it was to prepare us for what was coming. Twenty years ago, the Euro was the first test, and it was eagerly embraced. It saw Europe united under one currency — well some countries at least — and a set of international regulations. This is why we say that it was the first successful attempt at creating one global currency, namely the fiat currency known as the Euro.

What the Economist did not foresee was the advent of Bitcoin and eventually, all the other cryptocurrencies. When Satoshi Nakamoto created Bitcoin, he or she really threw a spanner in the works of those who control our world. It gave us a way to attain our freedom from economic slavery. It was handed to us on a gold crypto platter, and yet the masses turned they noses up at the idea. The sheeple prefer to trust the very people who lie to us, rob us blindly, and whose only goal is self-enrichment: the governments and those who control these puppets.

Ten years down the line, people have watched Bitcoin, and other cryptocurrencies such as Ethereum soar in price and popularity. This must have been worrying to the puppet masters, and overlords. Still, a plan was formed. Those with money, began buying up huge amounts of Bitcoin, driving the price ever higher. When it reached an absurd amount, they sold it at a massive profit, thus creating the very instability that they then referred to when scaring people away from using the currency. Simple, right?

You may also want to read:  Does Bill Gates Run the World?

The most worrying part about all of this is that we are now headed towards a variation on the one world currency theme, and no one has noticed. Everyone is cheering and tossing their common sense to the side. Yay for crypto! Perhaps by now, you can see where I am going with this. Those in power are smiling because the sheeple are being herded most effectively.

The old saying that if you cannot beat them, join them is almost true in this case. The caveat is that they have not joined us, but created an alternative path for the sheep to follow that appears to be familiar and safe. What is currently happening sadness me tremendously.

Every country and bank is creating a digital currency, but it’s not cryptocurrency. True cryptocurrency cannot be modified or altered by anyone. It is encrypted; end of the story. What they are creating is manipulated and controlled by the originator. So, after a fashion, it is a new world currency … with different names.

You see, the crux of the matter is not what the currency is called, only that it is controlled. They don’t care what you call it as long as you use it, and fall under their regulation. It must be said that regulation is not necessarily the same as stability. In fact, the attempt at stability is what breeds many problems. Life is about change.

In parting, remember a few key points, and you will not fall prey to the past. First, cryptocurrency is encrypted. This means that no one can modify the ledger or the code. This also means that no one can recover your passwords and crypto keys either. If any system can do this, then they control the money. Guard your digital keys because they are your passport to freedom.

Second, if any government, bank, or large corporation creates a so-called cryptocurrency, rest assured it is a pseudo currency and no different to the worthless currencies we have now. Facebook has just launched their own cryptocurrency called Libra. Do you trust it?

Inform yourselves because there is a change coming, but it will not be achieved by fighting. This is what they want us to do. Fighting is the smoke and mirrors that hide their true intentions: to maintain a hold over the world. We are not headed towards revolution. It is time for evolution. You have a world of knowledge at your disposal. You can no longer say you have not been warned or informed about any of this. Are you ready for a World Currency?

Want to learn more about the cryptocurrency and the crypto movement? Watch a few of my videos explaining it in layman’s terms.

Some Links for further reading: