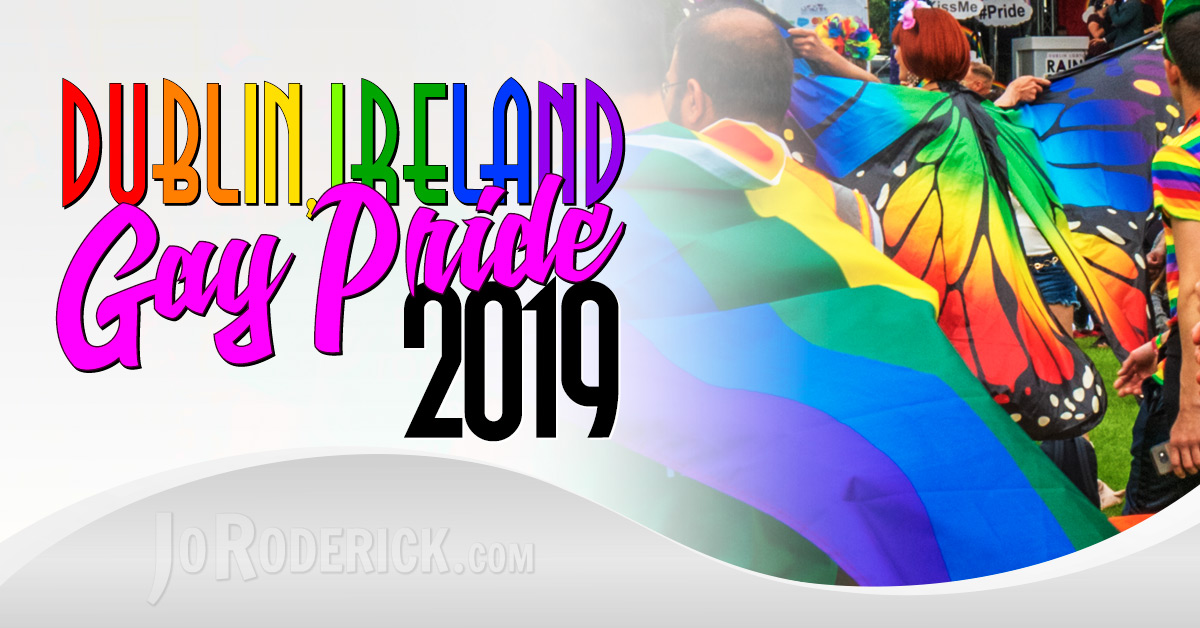 Right, so I’m a little late to the online party, but then I am fifty, and I don’t care. I prefer quality over speediness. It’s fun being a grumpy old fart. You can say whatever you like, and people just roll their eyes at the crazy old man.

I went to my first Dublin Gay Pride march recently. Let me start off by saying that it was different, and I’m glad I went. Not all my opinions on the subject will be wine and rainbows, though. Forgive me, but I am African, and I am used to real gay issues and not ‘first world’ problems. In this light, take what I have to say as constructive and not negative.

Overall, it was fun to attend the parade, film, and take pictures along the march. I always enjoy it, and this year was no different. I feel a sense of missing out when I skip a year. I wish I could have gone to the Cape Town Gay Pride March 2019, but that life is another lifetime ago.

Gay Pride Dublin 2019 was filled with cheerful people, and there were thousands of onlookers too. In my opinion, there were many tourists wearing the flag colours without understanding the significance. I suspect some of them might not have done so had they known. I wonder how many people thought this was just another colourful Dublin carnival? Insert a snigger here.

Now for the not so good, and I’ll explain why. There is no purpose in pointing fingers if you don’t explain any further. First, the parade had almost no floats … at all. It was just buses and people on foot. While that is not such an important issue, a float or two adds to the festivity of the day. It also allows people not able to walk the distance to ride along with the parade.

Yes, I know … there were buses, but it’s not the same as being on the back of a float, or walking alongside other people. When you are inside a bus, you are not part of the parade, but just a bystander along for the ride. I like being on a float and marching equally. Walking means I can dash around like a lunatic trying to capture as much as I can of the Gay Pride March.

Being on a float is a different experience and highly recommended. For one, you don’t need to walk. You are ferried around like royalty while gazing out over the masses. The downside of travelling on a float is that you see one view — the whole time. Your experience is limited to what goes past the truck, and that is sometimes not that much.

My second gripe is that the march was allowed to drag on. It was all segregated and the march just kept on going — for endless hours. The political speeches were already underway while some people were still marching.

The initial part of the parade I followed was what I consider the real march. As I am told, the rest was just advertising. It also meant that the stragglers arrived too late for much of the entertainment at Merrion Square. Those that followed the initial portion also missed out on some of the latter bits. A Pride March needs to be unified into one continuous stream to keep it consolidated. It also helps to remind people to march together for a common cause, and not just for the sake of advertising and sponsorships.

Lastly, there were too many angry queens and aggressive lesbians on stage at Merrion Square. Now, I know that to some I sound like a homophobe and a bigot, but I’m fifty, not an idiot. Standing on stage shouting, “Fight! Fight! Fight!” is doing more harm than good. Fighting has never helped anyone, and please … stop bringing up Stonewall. Remember it, learn the painful lessons, and move on.

In Ireland, the legal fight is largely over. What we need most here now is acceptance and understanding. Demanding special rights is just going to deepen the rift between the camps. Again, I feel the need to repeat that LGBT people do not need or deserve special rights. I don’t want to be special in that way. I want to be the same as everyone under the law. This is what gay people — and everyone else thrown in with our lot — needs.

I am not insensitive to special needs groups, and the need for change, but I cringe at the shoutings of those with a sense of self-entitlement. You do not speak for the rest of the gay community. You do not speak for me, and I stand up to be counted amongst the collective sane members of this group of outcasts. I cannot even keep track of all the abbreviations. It seems to me that people are more obsessed with the political grandstanding and labels than creating change.

The world doesn’t owe us anything other than equality and a peaceful life free from oppression. It doesn’t need to support us financially, or give us anything for free. At least, nothing more than an ordinary citizen can expect under the system. We are a talented, creative bunch. Let’s learn to be self-sufficient, and stop fighting for what really amounts to ‘first world’ problems.

As always, my motto is equal rights for everyone. There is no point in chanting, “No one is free until everyone is free,” if you are demanding special rights. Can we please change our approach? Stop fighting, and start living. Fighting is what divides the world. Have we learnt nothing? Be an activist for change, not violence.

Read ‘Why We Don’t Need Gay Rights’ next.